Over on my politics blog yesterday I wrote a post about David Laws, chief secretary of the Treasury until his resignation over questionable expenses claims.

One of the points I made in that post was that the circumstances of (what turned out to be) Laws’ downfall had actually made me warm to him as a person: had made me see him as a human being rather than a “dessicated calculating machine”; in a word, had made me like him.

My use of the word “like” was deliberate, and was influenced by James Alison’s use of the term, as exemplified in the title of the book by Alison that I’m currently reading: On Being Liked. For Alison, it is a key truth that God not only loves us – a much overused word – but that he likes us. That’s a truth to stop us in our tracks.

God so loved the world that he sent his only Son – yes, but had love alone been the motive, why did Jesus devote three years to spending time with his disciples and with outcasts: tax collectors, prostitutes, “sinners”? Because he liked them, likes people, likes us.

“Liking” may seem like a modest emotion, but often it is where our true humanness is to be found. Alison describes the response to 9/11 as one of “unanimity and grief” – in which the sacrificial order made sacred and meaningful what was (like the fall of the tower of Siloam) without any God-given meaning. But in the midst of it was something else:

There was the sacred grief I described, but there were also, mixed up with it, genuine outbursts of compassion: wonder at the two who jumped out of the building holding hands; a warmth of heart as news emerged of the messages of simple love bereft of any huge religious significance left on answering machines.

At the same time as the sacred violence extended its lure, we also made little breakthroughs of our own into simply liking humans.

Alison goes on to observe that the “moving images on film” failed to move him in the same way as did reading about the events in the next day’s newspapers, where “the human dimension managed to start to break through for me.”

He argues that Jesus (and in particular his resurrection) teaches us to escape the “sacred lie” of unanimity found in the sacrificial exclusion of some “other”, of our compulsion to impose “meaning” on meaningless violence. Jesus’ desire is “for us not to be trapped in death”, which leads Alison to a conclusion that is “apparently terribly banal but, I think, of earth-shattering significance”:

The person who teaches us to look away [from worldly patterns of desiring] and models for us another way of desiring actually likes us. It is only possible to imagine doing something like that for someone you actually like.

The staggering thing that this means, for me, is that the most extraordinary fruit of contemplation in the shadow of the violence which we are experiencing is: God likes us. All of us. God likes me and I like being liked.

There is an important contrast between “being liked” and “being loved”:

We are surrounded by the “false manufacturing of meaning and frightening power displayed by the satanic”. But in the midst of this:

we are being taught that our being liked and held in being is at the hands of something infinitely more powerful, infinitely restful, and we can live without fear. What is being revealed is the power of the Creator. “Fear not, little flock, for it is your Father’s good pleasure to give you the kingdom.”

So there’s a good message for this Trinity Sunday. The triune God, Father, Son and Holy Spirit, likes you. Think about that. And don’t be afraid. 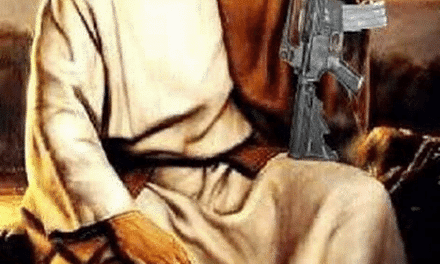 Free sheep under the true Shepherd