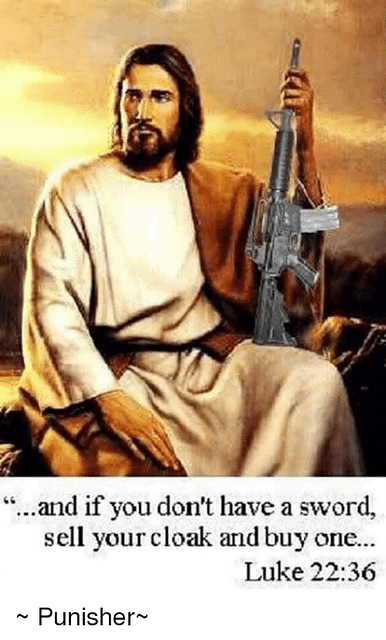 “You just shot an unarmed man!”

“Well, he should have armed himself…”

Here’s a passage from the gospels that I find puzzling and difficult to understand, particularly the highlighted words:

He said to them, ‘But now, the one who has a purse must take it, and likewise a bag. And the one who has no sword must sell his cloak and buy one. For I tell you, this scripture must be fulfilled in me, “And he was counted among the lawless”; and indeed what is written about me is being fulfilled.’ They said, ‘Lord, look, here are two swords.’ He replied, ‘It is enough.’ (Luke 22:35-38)

What are we to make of this? Is Jesus really advocating that his disciples arm themselves? Is this passage teaching that Christians have the right – even the duty – to possess (and, by implication, use) lethal weaponry as a defence against persecution?

Personally, as I said on the Boar’s Head Tavern a few days ago, I’ve always assumed that Jesus was being rhetorical when he says his disciples should sell their cloaks to buy swords – that he was pointing out the danger and drama that was about to burst into their lives as the temple guard arrived to arrest Jesus. His “it is enough” is then either heavily ironic – after all, how could two swords be enough to resist arrest by a large, well-armed mob? – or else a rebuke: more “that’s enough!” than “I agree that that is a sufficient number of swords”. This interpretation seems more consistent with Jesus’ words and actions in vv49-51.

Here are a couple of further pointers I’ve found on this passage in the past few days, which tend to support such a reading of Jesus’ words.

First, this post by Ben Witherington argues that using this passage as a justification for Christians owning weapons is “a bad misreading of this text, based in part on a bad mistranslation of it”. Instead, Jesus’ words have to be read as “dramatic hyperbole”, particularly in view of his reference to selling one’s cloak:

That this is dramatic hyperbole is clear enough sincethe disciples would always need their cloaks if they were planning on going on living. They couldn’t go around in their underclothes all the time, especially not in winter or spring in Israel, particularly in Judea. Jesus is not actually counseling the purchase of weapons here, only making clear that hard and dangerous times will soon be upon them.

Furthermore, in the original Greek Jesus doesn’t say “It is enough” or “That is enough” (which could be read as “Two swords are enough”), but simply: “Enough!” Witherington quotes his own commentary on Luke’s Gospel as follows:

Vs. 38 is heavy laden with bitter irony in light of the previous verse.  Jesus’ own disciples are not to act like thugs or transgressors, and yet here they are gearing up for ‘battle’.  Jesus has just used dramatic language to warn them that hard and hostile times are about to happen […]. But the disciples misunderstand the thrust of what he is saying and in fact they are already packing weapons!  They produce two swords, and will go on to use one of them (22.50).  In total exasperation at their thick-headedness Jesus terminates this discussion with ‘enough’ (hikanon estin) just as he will quickly stop their violence with a sword by ‘enough of that’ (eate eos toutou).   Jesus is not here an advocate of carrying weapons, even for self protection, but he is warning of violent times ahead.

The second is the abstract to a thesis on this passage by Kevin Moore of the University of Denver (regrettably I cannot thoil shelling out $37 on the full thesis!). Dr Moore argues that Luke’s account of this incident is a “literary foil that repudiates a well-known hagiographic tale”.

This tale of the two swords – which I assume Moore sets out in more detail in his thesis – has its origins in Genesis 34, where Simeon and Levi put an entire city to the sword (or rather, two swords) in revenge for Shechem’s rape of their sister, Dinah. The motif crops up again in 1 Samuel 13:19-22, where Saul and Jonathan are described as the only men in Israel’s army to have either sword or spear.

Moore summarises the themes of the “two swords” tradition as being: