A few months ago, the Guardian letters page published this appreciation of the Marxist historian John Saville, who had recently died. The writer recalled being a student of Saville’s at Hull University in the early 1970s, studying economic history:

We once waited for him to lecture us on the somewhat dry subject of “The Meiji Restoration in Japan”. He eventually arrived 20 minutes late and was heckled for his tardiness by the rebellious students.

He turned to us in amazement, smiled benevolently, dropped his notes on the floor, and gave us an impromptu lecture on the “concept of time is bourgeois”. We learnt about the employers’ struggle to drive the time-indifferent peasantry from field to factory, using hooters, clocks, time cards and coercion.

The best lecture I have ever experienced, and one which summed up his subversive instincts as well as his sense of humour.

This came to mind while reading the cyclist Michael Hutchinson’s book The Hour, an entertaining account of his attempt to beat the hour record. In one of the later chapters, Hutchinson writes:

Time. It’s not just me – almost everyone involved in any kind of exercise or sport is obsessed with the passage of time. Either exercise is a trial to be endured for the minimum time possible, worked out and monitored to the second, or it’s a predetermined distance to be completed quickly. Time is of the essence.

As a psychological phenomenon, I imagine it’s closely related to the one that causes otherwise sane people to drive a mile to the gym to walk two miles on a treadmill, then drive a mile home. It’s about being in control.

It struck me that the birth of modern sport was closely associated with industrialisation and the growth of the urban proletariat. There are no doubt many reasons for this (and no doubt much research has been done on it), but I wonder if one element is this turning the tables on time: from being controlled by it (in factories, mills and mines) to being in control of it (on football pitch, athletics track and bicycle). 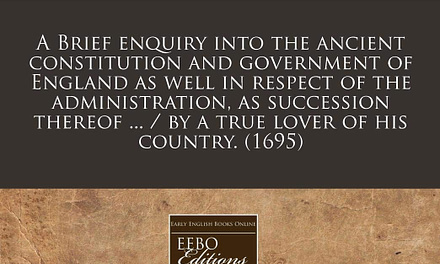 London and “the ancient constitution”