I’ve posted quite a lot in recent months on René Girard and James Alison and the concept of “mimetic desire”, but if the core of what Girard and Alison are saying on this subject can be condensed to a sentence, it is this:

We desire according to the desire of the other.

That is, humans are desiring beings. Where other animals have instinct, we have desire – and that desire arises in imitation of those around us, including the complex social and cultural patterns of behaviour and belief into which we are each born.

The question is then, which “other” are our desires going to imitate? The “social other” that surrounds us, the other of mimetic rivalry and violence? Or “Another Other”, one who is entirely outside those human patterns of mimesis, who has no rivalry or violence towards us – who, on the contrary, becomes the wholly-innocent victim of our rivalry and violence?

This then brings us to the subject of prayer. Prayer is about desire: about being honest with God about what our desires are, but in doing so coming to be shaped increasingly by his desires. To illustrate this, I want to develop some thoughts sketched out by James Alison in the closing section of his essay Prayer: a case study in mimetic anthropology, on the subject of the Lord’s Prayer.

As Fr Alison observes, the Lord’s Prayer “is all about desire”. It starts with God’s desire, then moves on to the expression and reorientation of our own desire. I’ve summarised this in the following diagram:

This shows the first half of the prayer as being concerned with God’s desire: for the hallowing of his name, the coming of his kingdom, the doing of his will. In the second, we move on to our own desires – starting with our most basic and immediate desire, the desire for “our daily bread”.

However, we then move on to two final petitions that I have shown in columns, to highlight the parallels between them. These petitions have much the same focus: embracing our “new self”, the self that is formed by the regard of “Another Other” in forgiveness and freedom from fear; and letting go of our “old self”, the self that is formed by our regard for the “social other”, of hanging on grimly to the “debts” owed by others and being bound by Satan’s patterns of mimetic rivalry. This is shown in more detail in the following diagram:

So the Lord’s Prayer itself is an expression of “mimetic anthropology” expounded by Girard but clearly understood by many before him, supremely by Jesus. To pray it is to have our desires, and thus ourselves, reshaped by “our Father in heaven”. 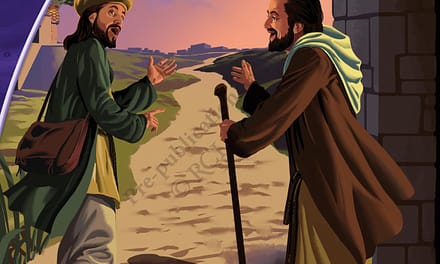 The “great school of prayer”